What is a Unichip?

UNICHIP is much more than just a “chip”. It is a fully functioning computer which is added to the vehicle’s existing engine control unit (ECU) via a PLUG-IN or STRAIGHT TO HARNESS loom kit! It can be accurately described as a “Piggy-back” computer.

It is capable of a whole range of functions such as:

• Boost Control: Unichip has complete 3D control over boost pressure across the entire operating range of the engine. This allows our tuners to increase the boost pressure as required, keeping Air Fuel Ratios within a safe limit.

• Injector timing: This is a unique Unichip feature to have complete 3D control of injector timing. This means we can control the exact time they open to achieve an optimised fuel burn. This will result in lower exhaust gas temperatures and greater engine longevity.

• Throttle Booster: This feature enables the Unichip ECU to achieve a faster throttle response and reduced turbo lag. This is a standard feature in the Unichip ECU and can be modified as needed by our tuners.

• Water Temp Protection: This is the “built in” safety feature of the new Unichip Uni-x ECU! We have the ability to monitor engine temp via the coolant temperature sensor. This allows the tuner to manipulate the mapping on a sliding scale as the engine temperature rises. We can remove any changes to the fuel, boost and timing when cold, adding in the changes slowly and in a controlled fashion as the engine comes up to operating temperature, to ensure it maintains maximum power and torque output, without compromising the engine.

• Map Select (optional): One of the most popular benefits of the Unichip system is the Map Select Switch! This gives the customer up to 5 different tune maps, perfect for those needing multiple mapping. Power, towing and economy for instance! Read more below!

• EGT protection (optional): This is the “add on” safety feature of the new Unichip Uni-x ECU. We have the ability to monitor engine exhaust temps via the Unichip EGT sensor. This allows us to manipulate the tune on a sliding scale as the Exhaust temperature rises. Meaning: As the exhaust temperature rises the Unichip Uni-x ECU will intercept a signal, removing the fuel, boost and timing, slowly and in a controlled fashion to ensure it maintains maximum power and torque output, without compromising the engine.

PLUS MUCH MORE! Have something specific in mind? Simply reach out and ask, we'll try our best to find you a solution!

Why should I install a Unichip to my car?

The most obvious reason is to increase engine performance. Significant gains in torque and power across the entire RPM range are easily and safely achieved. The engine will be smoother, deliver greater throttle response and maximise fuel efficiency at all RPM and throttle positions.

How does the Unichip increase engine power?

Every engine requires optimum timing and air fuel ratio at all RPM and load conditions. Unichip gives our experienced tuners the access and ability to adjust and optimise timing, fuel and boost as required! All done in real time on a chassis dynamometer to suit YOUR vehicle.

NO! Unichip is a supplementary computer which is programmed to contain the optimum fuel and ignition adjustments for each individual engine.

The factory engine management control unit is not altered in any way, The Unichip ECU is simply installed by connecting to the wires of the original factory ECU.

Plug and Play options are available for most vehicles (great for vehicles under warranty!)

Once removed there is no electronic footprint left behind for dealers to find.

It is important to note that ANY aftermarket modification can void a Manufacturers warranty. In saying that, a benefit of the Unichip system is that for vehicles compatible with a PLUG-IN system, there is no electronic footprints whatsoever. Removal of the system returns the vehicle to complete stock!

When using Unichip, we do not remove, open or “flash”/write” over your factory ECU which makes Unichip one of the best products for aftermarket tuning.

A 2 year unlimited kilometer warranty applies for all Unichip products. 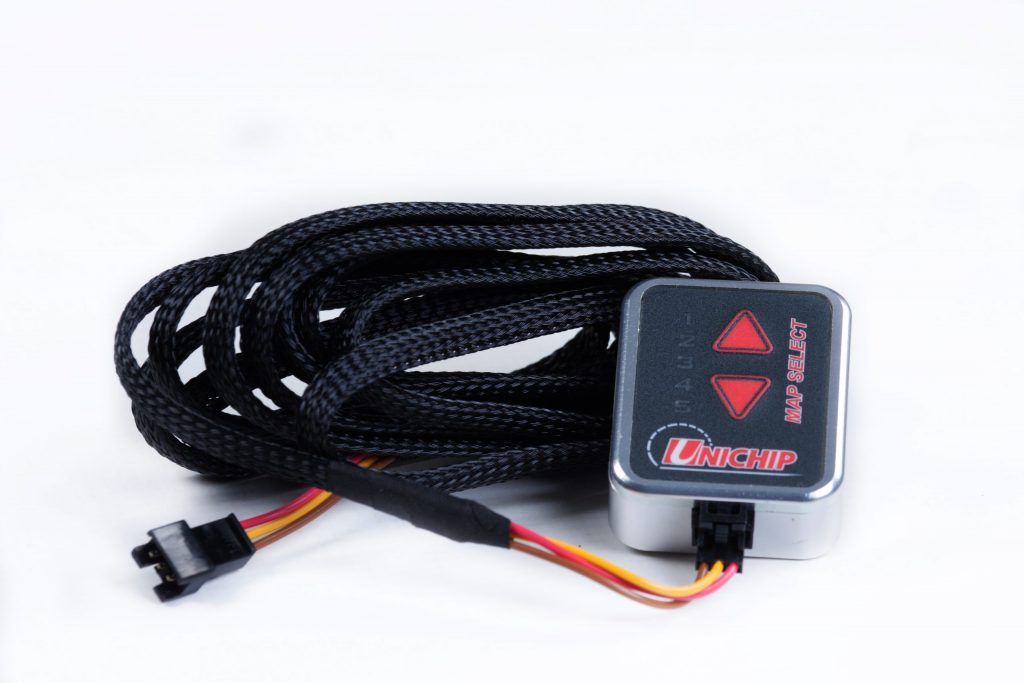 There are two different types of switches available.

The Map select switch enables you to choose between 5 different possible maps that can be programmed by our tuner according to your wishes!

Some of the most common are:

Access Denied
IMPORTANT! If you’re a store owner, please make sure you have Customer accounts enabled in your Store Admin, as you have customer based locks set up with EasyLockdown app. Enable Customer Accounts